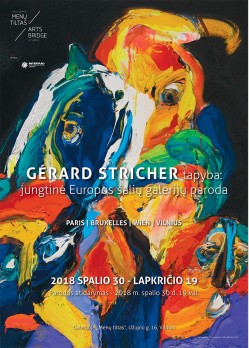 Four galleries of the European capital cities – Protée in Paris, MM in Brussels, Lindengrün in Vienna and Menų Tiltas in Vilnius simultaneously introduce personal exhibitions of French painter Gérard Stricher, characterized by very vibrant, overflowing playful energy and rich colors. Each gallery will present twenty Stricher’s canvases. These four galleries aim to connect at least a part of Europe with this cultural event.

Born into a family of artists in Sarrebourg, Moselle, in 1948, Gérard Stricher began painting in the 1970s, when he was an engineering student in Paris. He moved in art circles and found buyers and encouragement for his work, but his industrial bent led him to an international career in management. He became a “world citizen” and the resultant encounters with people, landscapes and cultures everywhere formed subconscious strata that would later surface in his painting.

In 2004 he bought an old mill in the Vexin region of northwestern France, where he set up his studio and began working intensely: this was a new adventure centred totally on his painting. An exhibition at Espace Commines in Paris in 2007 clinched his reputation with collectors and galleries: his pictures received an enthusiastic reception at the Bartlow Gallery in Chicago and his American career really took off with a one man show at Art Chicago. He was also shown by the Artbox Gallery in Indianapolis. His paintings were subsequently acquired by the Empire Bank in Springfield, Missouri, the PepsiCo Foundation in New York and various prestigious private collectors in the United States, including Bob Bohlen. These successes were followed by exhibitions at Galerie Protée and Galerie Schwab Beaubourg in Paris. 2012 saw Stricher on display at Laura Rathe Fine Art in Houston and Dallas, and at Galerie Lindengrün in Vienna.

In 2013 he exhibited at Galerie Mézières in Auvers-sur-Oise, and the following year at Galerie Kellermann in Düsseldorf and Galerie La Véluze in Honfleur. After winning the Dizart Editions competition in 2015 and being rewarded with a monograph, he has just shown at MM Gallery in Brussels. Mid 2017 he joined the Gallery Protée in Paris.

We are pleased to invite you to the opening of the Gérard Stricher exhibition on Tuesday, October 30th, at 7 pm. at the gallery Menų Tiltas (Užupio St. 16, Vilnius, Lithuania). During the event there will be a presentation of the exhibition catalog. The opening will be attended by the artist himself. Exhibition at the gallery Menu Tiltas will be open until November 19th. Gallery working hours: II-V 12-7 pm., VI 12-5 pm.