Pranas Gailius is undoubtedly one of the most prominent Lithuanian émigré artists. It is an artist of vital and abstract world, working with painting, graphics and sculpture. Spontaneity of abstraction in his works is blend with rich texture and colour, and the artist’s sensitivity to the power of the poetic word is embedded in artistic books and graphic sheets of intelligent extraordinary artistic ambition and power. “What I took away from Samogitia, is always with me. My eyes grew later in the French art, architecture, music, but the source – you never can change it!“ Gailius once said. The source of his changing, constantly renewing creation is the Paris school, intertwined with the Lithuanian national artistic legacy.

Creative biography of Gailius is interesting and challenging. He was born on the 28th of January 1928 in Mažeikiai; here began attending a gymnasium and dreaming of becoming a poet, but the calamities of war made corrections to his dreams. Upon arrival to the West, he stayed in the Lithuanian community in Strasbourg, tried to learn theatrical art, architecture, and finally decided to attend lectures at the Strasbourg School of Decorative Arts (Ecole des Arts Decoratifs) and engage in painting. In 1950 he went to Paris and was accepted into the study by Fernando Leger in Montmartre. In about 1953, encouraged by older friend Vytautas Kasiulis, he further studied lithography at the Higher National School of Fine Arts (Ecole Nationale Superieure des Beaux-Arts). Louvre and Museum of Modern Art became important schools for Gailius. According to the artist, “The French art history is fantastic!” There are always geniuses who, starting with Foucąuet come to Braque, Matisse, and Léger. I’m impressed also with Poussine, and his Paradise is the pinnacle for me: sensitivity, education and heart. By regularly visiting museums, I learned a lot in them.” Gailius considers his teacher Léger to be one of the greatest painters of the twentieth century, but we cannot see the direct impact of the famous painter in his student’s works. The creator speaks about it with a great pride: “Léger taught not to copy, but to find your own style, so I am indeed his good disciple.” In one or another aspect, we find the taste for contrasts and understanding of the importance of drawing in Gailius works of different periods.

The first solo exhibition of Gailius works was held in 1955 in Paris, at Galerie du Haut Pavé. It was widely commented: TV issued a reportage, and opinions in the press were favourable as well. Protectionism was being promoted. Around the same time, in about 1957, Gailius began to sign his works only with his name – Pranas. It was his short artistic pseudonym, easy to remember. Soon the artist’s relationship with other Paris galleries began. Exhibitions were being held one after the other, went beyond the boundaries of France, were held in Berlin, Munich, Stuttgart (1960), Chicago (1963), Tokyo, Geneva, Luxembourg (1966), Gothenburg (1967), etc. Today, the number of exhibitions with Gailius works has far exceeded a hundred.

At the beginning of Gailius’ creative path, in about the middle of the sixth decade, a wave of abstract expressionism gaining popularity attracted considerable criticism and the gained the favour of the audience in France. Many young artists were unconditional supporters of this trend of art. Painters were seeking for expressiveness of plastic abstract shapes, looking for originality in style, beauty of textures and diversity of stroke. Gailius was extensively interested in the emerging modern art movements going around. He was encouraged of taking an interest in the vanguard, being open to innovation by the friendship with composers, students of the famous innovator Olivier Messiaen: Mikis Theodorakis, Luc Ferrari, and Pierre Migaux. Frequent meetings, discussions, listening and analysis of modern tunes of Béla Bartók, Leos Janacek while still rarely sounding in concert halls, was automatically devoting to the search for new means of expression in art.

Taking the unique way of searching, Gailius was moving increasingly away from materiality. Abstract forms first broke into his graphic works, but quickly took over all creative activities – painting, watercolour, and sculptural terracotta objects. According to the artist, it was the nature and it’s never inexhaustible vitality that pushed him towards the abstract art. “I do not depict anything, only transfer energy,” he says. Indeed, powerful creative energy emanates from the works of Gailius of that period. Intensive creative work has become a stimulus for the artist to publish is creative manifesto (in April 1981 in the Ars Magazine). It declared that “painting has separated from the literature at the beginning of the last century, and their paths will never come together”, that “abstract painting is not a simple alphabet, but an entire way of thinking”, and that “one has to resist all these realisms, because they undermine and imprison shapes and keep imagination aloft and depressed.” In this manifesto Gailius established his own principles, that realism is an artistic trend has become obsolete and finally exhausted itself in the second half of the twentieth century.

However, in no way we can describe Gailius’ painting style as pure abstraction. Rather, it is a dimension of abstract expressionism, spilling on canvas and cardboards with eruptions of primordial colours and strokes. Occasionally, it remembers barely recognizable forms of the visual world. Cycles Hauteur d’ombre (In the highlands of the Shadow, 1985), Surface émue (Sensitive surface, 1986), La verte envie (The Green Desire, 1994) seemingly vibrate from the spiritual tension bursting in pathetic brush strokes and deep brush shaft trails. The subtle, barely perceptible touch of paint is like a respite, a reconciliation. The stroke character and colour in the paintings of Gailius become a key lever for the artistic work.

Paintings and prints – both of these branches of art are important to the artist. “If I was only a graphical artist, I would feel myself limited and constrained. In the artistic whole one can always find the right place to what is typical for graphics, and vice versa – while making graphics, it is possible to get a clearer understanding of some of the purely pictorial problems. If I was not a painter, I can say, I could not work in graphics like I’m doing it now.”

The seventh decade has marked the extremely productive artist’s work in the field of graphics. One after the other, expressive copper engraving series were born in Gailius workshop and welcomed in exhibitions. One of the first was the Metamorphoses (1963), Profil expression (Profile Expression, at about 1963) and Intra Muros, 1965) created with etching, drypoint and chiselling technique. The series depict an excellent metal technique. Small-sized copper engravings surprise with subtle nuanced greyish and blackish tones, shifting into a deep velvet black. Greater recognition important for the artist came in 1963, when the French National Library bought three of his carvings from Pranas solo exhibition at La Nouvelle Gravure gallery. He became the first Lithuanian graphical artist whose works were included in the famous library collection.

Having immaculately mastered the copper engraving technique, Gailius channelled his artistic interests in a new direction. The artist interested in poetry once got a book of Lithuanian folk songs published in French. Le Livre Premier de la Suite Lithuanienne (The First Lithuanian Suite) – five Lithuanian folk songs translated into French by Oscar Milosz appeared in 1968 in Paris. It was a luxurious bibliophilic edition, published in the prestigious art publisher Antares in only 40 copies. The book was contemplated as a single ensemble: the artist created the cover, two facing pages and the closing, and carved the text. The original composition of the artistic image embodied the blink of modernity and archaic folk. It was the first of the livre d’artiste making Pranas famous. In 1970 Antares released the second book of his graphic works – Le Mer (The Sea) with melancholic Milosz’s poems successfully interwoven into the musical fabric of art.

The restless artist was still looking for new challenges. In the early seventies he became interested in the prospect of colour graphics, the artist experimented with graphic press. The desire to maximize the highlight of colour can be seen in the Incablock series (1972). It is an expression of red, black and white compressed in a frame. Externally calmer, more moderate solution is dominant in the colour graphic series Eagle lake story (1979-1981), created after the stay in Canada and inspired by the indigenous natural beauty.

The colour gradually moved into the artist’s books. The livre d’artiste – D’un bel Orient (The Splendid Orient) published in 1980 according to the Rubaiyats By Omar Khayyam harmoniously revealed the connection of colour, abstract and realistic elements. In the huge space of text and fragmented pattern improvisation you can see the French elegance and lightness of ship reminiscent of Matisse. The painter book Deuxieme Suite lithuaniennes (Second Suite in Lithuanian, 1983-1986) is another return to the source of his origins: the artist selected one of parts of Kazys Bradūnas poem Poet Priest – Donelaitis Sermon During the Anniversary Mass. The work is interesting by the reiteration of rhythmic motifs while white embossed relief, completing nearly all of the larger sheets, emphasises the suggestion of carved words and images and accentuates the sacredness of the moment.

The original livre d’artiste not only brought international recognition to Pranas. He once said: “The book is everything to me. I need for it to be around me. So that I could come up, and open it at any time. If I have some understanding of the world and the people, it is because of these books. I love reading books, but I love the book as the object. I like letters pouring into a vast meadow.”

With a similar sense of uplifting religious feelings the artist began another book, this time in the biblical theme. It is the 91st psalm of David which he began to create in 1991. He created large-format sheets using the mixed colour linocut relief technique with engraved Psalm text in French and Hebrew that overwhelmed the artist’s imagination for long. In recent decades, Gailius spends a lot of time in his studio in southern France, Aix-en-Provence. He finally could work on large-format canvases and cardboards. The artist’s relationship with the Cardinal and Archbishop of Paris Jean-Marie Lustiger that began in 2000 became highly productive. Commission by him, on the eve of the new millennium Pranas Gailius decorated many churches in Paris (St. Sulpice, St. Roch, St. Germain dés Pres), combining painting, religious symbolism and scripture texts. The new experience again brought the artist back to the magnificent 91th Psalm of David. Within a few years (till 2004) he created sixteen impressive large-format canvases, originally combining painting, graphics and collage.

Recently, the artist celebrated the spectacular anniversary of a century, but its creative potential seems to be inexhaustible. Now in its eighth year, Pranas is working on a huge series of paintings according to the unwritten play of Witold Gombrowicz (1904–1969) The Fly. The freedom and plasticity of strokes in this series was undoubtedly affected by the Japanese calligraphy lessons attended by the artist in his young years and certainly not forgotten. Lines in the compositions sometimes squirm like letters, turning into a strange text – illegible and yet with encoded meaning. In Gailius words, in his Fly cycle “the fly itself is only a spark, which can lit a huge fire or an erupting volcano”. Speaking of the arrangement of works in the series, the artist is joking that he likes expressive curved lines, but feels moderation and can keep them under control, because he follows the rephrased saying of Henri Matisse that “swerves are not mad, because in the eyes of the artist there is a weight that regulates their spree and determines the balance. “

The elemental art of Pranas Gailius as abundant sea of feeling and his ways of expression are not only form experiments. Pranas‘ paintings is a dynamic and vibrant abstract art, imaginatively transforming the reality. In his paintings and graphic works the artist embodied the spirit of the Lithuanian world outlook and, merging it with the French artistic inspirations, gave it a substantial modernist expression. 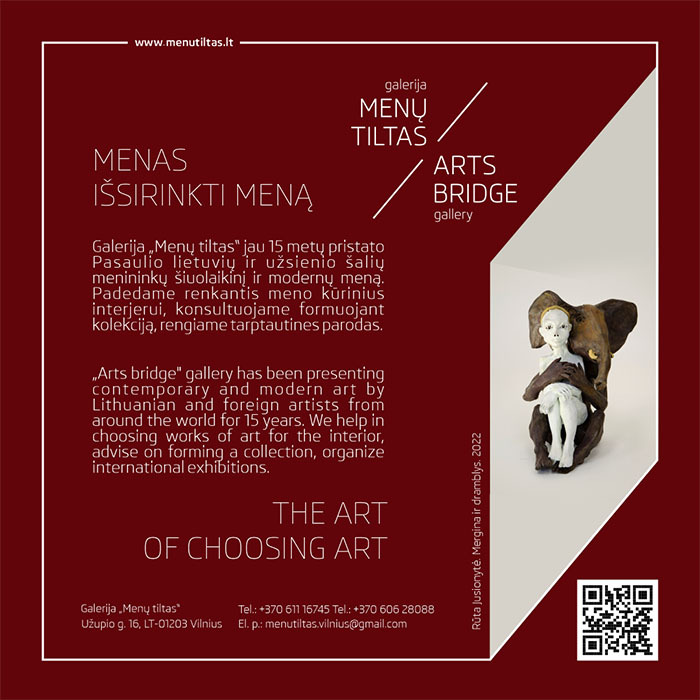