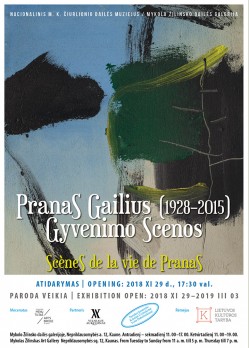 Pranas Gailius is one of the most famous Lithuanian artists in the world. The art world started to recognize his name (Pranas Gailius, dit Prӓnas) around 1955. His first personal exhibition that took place in Paris, Galerie du Haut Pavé, received favorable reviews in press and television, and opened him the way to recognition. Afterwards followed exhibitions in Berlin, Munich, Stuttgart, Tokyo, Geneva, Luxembourg, Chicago, Gothenburg. However, here, in his homeland, Gailius’ artwork was discovered quite late. The first exhibition in Lithuania took place only in 2004 at the National Museum of M. K. Čiurlionis.

Among the numerous works of the artist there are four paintings called Scène de la vie de Pranas (Scene of Pranas’ life). Indeed, all of his works depict his life. He wrote about his artwork: “My art is my biography.” The artist created in cycles that reflect his thoughts and attitudes to the different processes of life. The artist said that all of his works could be called sensitive surfaces because all of them sensitively depict different emotional states.