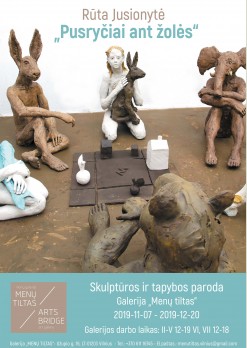 Ruta Jusionyte’s enigmatic « Déjeuner sur l’herbe »,  comes as a variation of Edouard Manet’s eponymic work, who got his own inspiration from an engraving by Marcantonio Raimondi – after Raphaël – and from Gorgione’s and Titien’s Concert Champêtre.

Six characters are seated around a game board – staging a kind of Monopoly with three tiny houses and two apples – three of them hybrids of man and animal figures (one with an elephant head, another a hare, and the last one  a bear), the other three are women, one carrying a fish in her arms, another a hare on her lap.

This game without clear or definite rules, a metaphor of life itself, alludes to the ties that bind men and women together. Just as the apple symbolizes temptation and desire, life instinct, homeliness and security, the hare, the bear and the elephant allude to contradicting  aspirations. In this game  of life, altogether thrilling, cruel and challenging, passion and reason, desire and intellect, instinct and duty all mingle and defy each other. In this harmonious circle, the desirous hare, the protective bear and the wise elephant all live together like forces in perpetual tension engaging in an unescapable battle-game.